A Highly Rated Coastal City with a Superb Climate

This is a major city in the state. It’s located right on the ocean coast. Approximately 120 miles away is another large city. This city is the eighth largest city in the United States. It is the second largest in the state and is one of the fastest growing cities in the nation. 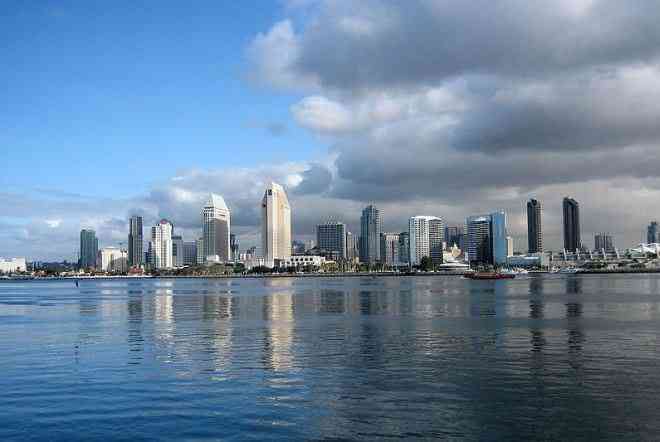 The Skyline of this coastal, US City. Photo by http://flickr.com/photos/tomcio77, SA-CC-by-2.0

It is also the birthplace of one of the states, and is known for its mild year-round climate, but that’s partly because it is located by the coast. It has a natural deep-water harbor and extensive beaches. The city has a long association with the U.S. Navy. Recently it has emerged as a healthcare and biotechnology development center. The population of this coastal city was estimated to be 1,322,553 as of 2012.

The city’s income comes mostly from military and defense-related activities, tourism, international trade, and manufacturing. The presence of a popular large University here and its Medical Center, has helped make the area a center of research in biotechnology. This city is rated one of the top-ten best climates in the Farmer’s Almanac and is one of the two best summer climates in America as scored by The Weather Channel.

Take the quiz and let’s see how good you are and locate this city.

This Travel Quiz is about a coast city in the USA. There are 4 – 6 clues to help guess the city. The level of this test is easy.

Answer the question. The answer is worth 20 points. If you don’t know the answer, then take a guess (unless you want a guaranteed zero for the answer).

The correct answer to this quiz is a potential city you will want to visit if you’ve never been here. If you live in the state the city is located in and haven’t visited this city then you should visit.

US Cities   (goes to sister site)