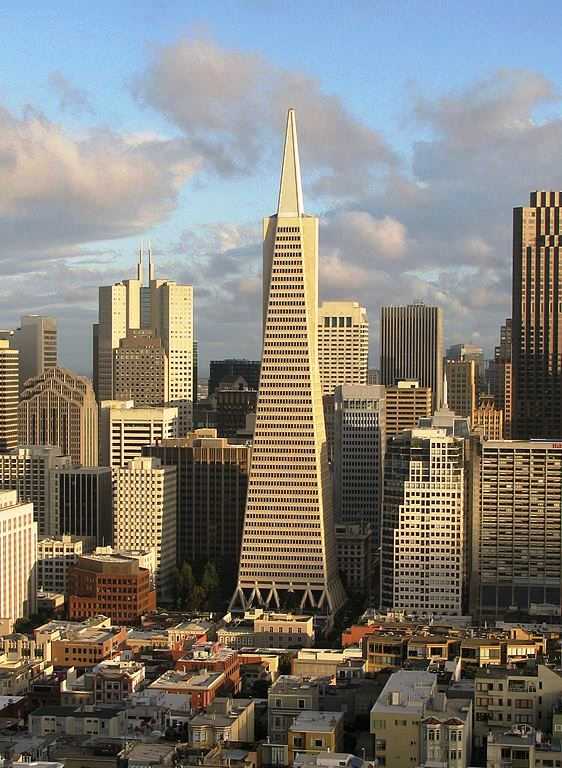 This relatively tall building is the tallest skyscraper in the skyline of this city. The building no longer houses the headquarters of the Transamerica Corporation, who moved their U.S. headquarters to Baltimore, Maryland, but it is still associated with the company and is depicted in the company’s logo. Standing at 853 ft (260 m), on completion in 1972 it was the eighth tallest building in the world.

Although the tower is no longer Transamerica Corporation headquarters, it is still associated with the company and is depicted in the company’s logo. The building is evocative of the city and has become one of the many symbols of the city.

The building was the tallest skyscraper west of Chicago from 1972 to 1974 surpassing the then Bank of America Center. It was surpassed by the Aon Center in Los Angeles.

The building is thought to have been the intended target of a foiled terrorist attack, involving the hijacking of airplanes as part of the Bojinka plot, which was foiled in 1995. In 1999 Transamerica was acquired by Dutch insurance company Aegon. When the non-insurance operations of Transamerica were later sold to GE Capital, Aegon retained the building as an investment.

This Travel Quiz Weekly Quiz is about an unusual looking building. There are a few hints to help guess the answers. The level of this test is unknown.

Answer the single question. The answer is worth about 20 points. If you don’t know the answer, then take a guess (unless you want a guaranteed zero for the answer).

This building is in a city that gets a lot of visitors. If you haven’t been there it is a potential city you should visit.