This famous Monument is a sculpture that was carved in situ (or “in place”), sometimes referred to as “living rock”. This National Memorial is a sculpture carved into the granite face of the mountain (Lakota Sioux name: Six Grandfathers) near Keystone, South Dakota, in the United States. Sculpted by Danish-American Gutzon Borglum and his son, Lincoln Borglum, The monument features 60-foot sculptures of the heads of four United States presidents: George Washington, Thomas Jefferson, Theodore Roosevelt, and Abraham Lincoln.

Conceiving the idea of carving the likenesses of famous people into the Black Hills region of South Dakota is credited to South Dakota historian Doane Robinson. It was done in order to promote tourism in the area. Construction on the memorial began in 1927, and the presidents’ faces were completed between 1934 and 1939. Upon Gutzon Borglum’s death in March 1941, his son Lincoln Borglum took over construction. Although the initial concept called for each president to be depicted from head to waist, lack of funding forced construction to end in late October 1941. 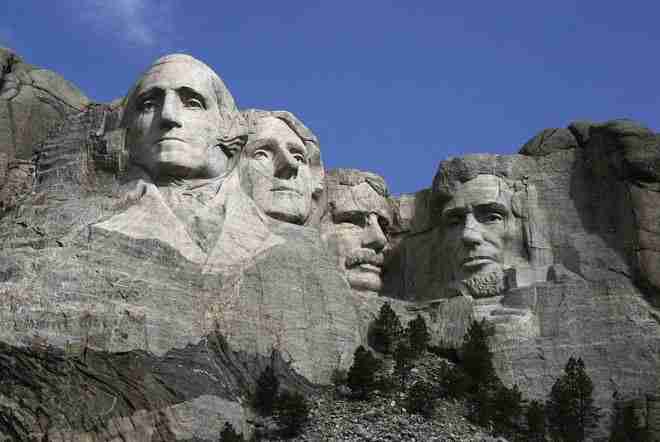 The Presidential Monument as seen from the viewing plaza. Photo by Dean Franklin, SA-CC-by-2.0

As an iconic symbol of presidential greatness, the mountain has appeared in works of fiction, and has been discussed or depicted in other popular works. The memorial was iconically used as the location of the climactic chase scene in Alfred Hitchcock’s 1959 movie North by Northwest. The monument attracts nearly three million people annually.Tourism is South Dakota’s second-largest industry, and this monument is the state’s top tourist attraction.

However, the monument is not without controversy. This popular monument is controversial among Native Americans because the United States seized the area from the Lakota tribe after the Great Sioux War of 1876. The Treaty of Fort Laramie from 1868 had previously granted the Black Hills to the Lakota in perpetuity.

The monument also provokes controversy because it is alleged that underlying it is the theme of racial superiority legitimized by the idea of Manifest Destiny. The four presidents chosen by Borglum were all active during the period when the United States was annexing Native American land. Gutzon Borglum himself excites controversy, because he was a member of the Ku Klux Klan.

Take the quiz and let’s see how good you are at this quiz about four famous U.S. Presidents.

This Travel Quiz is about a famous monument in the United States. Some questions have clues while others may not. This quiz also has True/False answers. The level of this test is easy.

Answer all questions. Each answer may be worth a different amount of points. If you don’t know the answer, then take a guess (unless you want a guaranteed zero for the answer).

If you are in the area where the monument is located be sure to visit. It is an amazing sight to see figures carved right into the mountain.

The monument is not in a city proper but if you want to learn something about a few cities in the USA click the link indicated below which will take you to our main travel site.