The most famous pyramids are the Egyptian pyramids — huge structures built of brick or stone, some of which are among the world’s largest constructions. They are shaped as a reference to the rays of the sun. Most pyramids had a polished, highly reflective white limestone surface, in order to give them a shining appearance when viewed from a distance. The capstone was usually made of hard stone – granite or basalt – and could be plated with gold, silver, or electrum and would also be highly reflective.

Electrum – Electrum is a naturally occurring alloy of gold and silver, with trace amounts of copper and other metals. It has also been produced artificially, and is often known as green gold. The ancient Greeks called it ‘gold’ or ‘white gold’, as opposed to ‘refined gold’. Its colour ranges from pale to bright yellow, depending on the proportions of gold and silver.

Sometime after 2700 BC, the Egyptians began building pyramids, until about 1700 BC. The first pyramid was built during the Third Dynasty by king Djoser and his architect Imhotep, as a step pyramid by stacking six mastabas (a type of ancient Egyptian tomb in the form of a flat-roofed, rectangular structure). 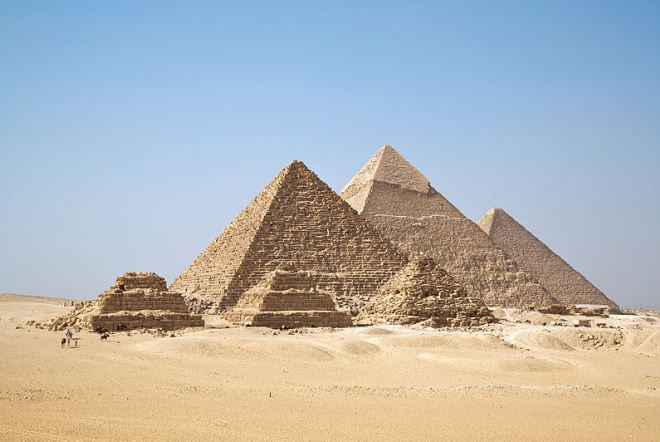 The ancient pyramids of Egypt at Giza. Photo by Ricardo Liberato, SA-CC-by-2.0

The largest Egyptian pyramids are the pyramids at Giza. “The Egyptian sun god Ra, considered the father of all pharaohs, was said to have created himself from a pyramid-shaped mound of earth before creating all other gods. The pyramid’s shape is thought to have symbolized the sun’s rays” (Donald B. Redford, Ph.D., Penn State).

The age of the pyramids reached its zenith at Giza in 2575–2150 BC. Ancient Egyptian pyramids were in most cases placed west of the river Nile because the divine pharaoh’s soul was meant to join with the sun during its descent before continuing with the sun in its eternal round.

As of 2008, some 135 pyramids have been discovered in Egypt. The Great Pyramid of Giza is the largest in Egypt and one of the largest in the world. It was the tallest building in the world until Lincoln Cathedral was finished in 1311 AD. While pyramids are associated with Egypt, the nation of Sudan has 220 extant or still existing pyramids, the most numerous in the world and there are also pyramids in other countries. 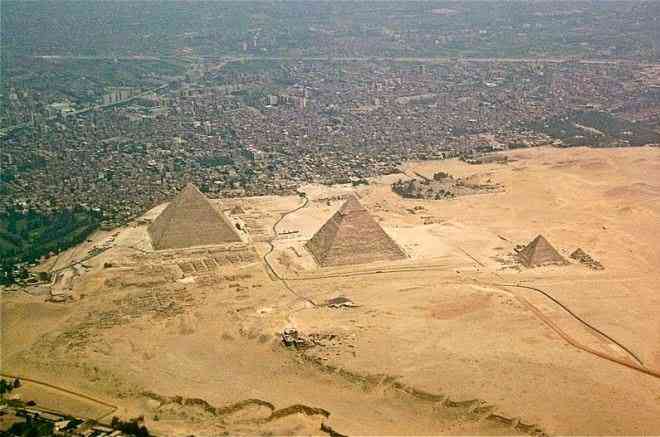 The Giza-pyramids and Giza Necropolis, Egypt, seen from above.

Who built the pyramids

Approximately 2.3 million blocks of stone (averaging about 2.5 tons each) had to be cut, transported and assembled to build Khufu’s Great Pyramid in Giza. The ancient Greek historian Herodotus wrote that it took 20 years to build the pyramid and building it required about 100,000 men. However later archaeological evidence doesn’t support that number and suggests that the workforce might actually have been around 20,000 men.

However all versions of history don’t say the same thing. Some other versions of history say that pyramids were built by slaves or foreigners forced into labor. Skeletons excavated from the area show that the workers were probably native Egyptian agricultural laborers who worked on the pyramids during the time of year when the Nile River flooded much of the land nearby.

Here is a video of some secrets of the pyramids. I personally think most people will be amazed at what this video reveals. I cannot vouch for the information in the video and whether the speculations are true or not, but watch it and see for yourself. This video is 11:11 minutes long.

Here is a short video about theories of how the great Pyramid may have been built.

A short documentary on how the Great Pyramid was constructed reviewing various alternative ramp theories. This is a updated HD clip of our classic video.


The Great Pyramid of Giza is one of the Seven Wonders of the Ancient World. It is the only one to survive into modern times. The Ancient Egyptians covered the faces of pyramids with polished white limestone, containing great quantities of fossilized seashells. Many of the facing stones have fallen or have been removed and used for construction in Cairo. Most pyramids are located near Cairo, with only one royal pyramid being located south of Cairo, at the Abydos temple complex.

Early kings such as Snefru built several pyramids, with subsequent kings adding to the number of pyramids until the end of the Middle Kingdom. The last king to build royal pyramids was Ahmose, with later kings hiding their tombs in the hills, like in the Valley of the Kings in Luxor’s West Bank. In Medinat Habu, or Deir el-Medina, smaller pyramids were built by individuals. Smaller pyramids were also built by the Nubians who ruled Egypt in the Late Period, though their pyramids had steeper sides.

Did Ancient Egyptians Use Pyramids to Generate Electricty – John Mittendorf

John Mittendorf, apologist and researcher, continues his discussion of the Great Pyramid and whether early Egyptians were really that intelligent and innovative.

View the picture and read the above article BEFORE you take the quiz
and view the videos.

Take the quiz and let’s see how good you remember what you read about the pyramids at Giza.

This Travel Quiz is about the Pyramids of Egypt. There may be clues to help guess the answers. But don’t count on it – I’ve been told that all the clues for this quiz were stolen. There are True False questions. The level of this test is easy.

This quiz is timed (3 min) so be aware of that.

The quiz is about the Egyptian Pyramids. If you haven’t seen them then it is a big attraction you must see if you get a chance.