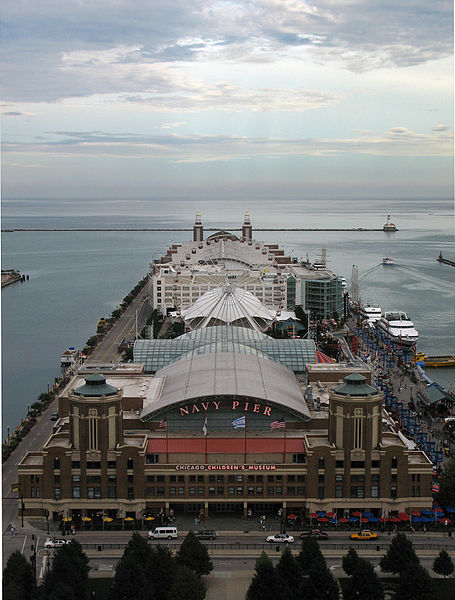 Navy Pier is a 3,300-foot (1,010 m) long pier on the Chicago shoreline of Lake Michigan. It actually extends into Lake Michigan. It is located in the Streeterville neighborhood of the Near North Side community area. The pier was built in 1916 at a cost of $4.5 million. Navy Pier was a part of the Plan of Chicago.

Navy Pier was planned and built to serve as a mixed-purpose piece of public infrastructure. Its primary purpose was as a cargo facility for lake freighters, and warehouses were built up and down the Pier. However, the Pier was also designed to provide docking space for passenger excursion steamers.

In the pre–air conditioning era parts of the Pier, especially its outermost tip, were designed to serve as cool places for public gathering and entertainment. The Pier even had its own tram. Today, Navy Pier is Chicago’s number one tourist attraction.

Construction of the pier began in 1914 and took two years to build at a total cost of $4.5 million. When it opened to the public in 1916, it was the largest pier in the world. The Pier was built both to handle shipping and as an entertainment site.

The original plan proposed five piers, but only one was commissioned. In 1917-18, during World War I, the Pier housed many Navy and some Army personnel, the Red Cross, and Home Defense units. It even had a jail for draft dodgers. 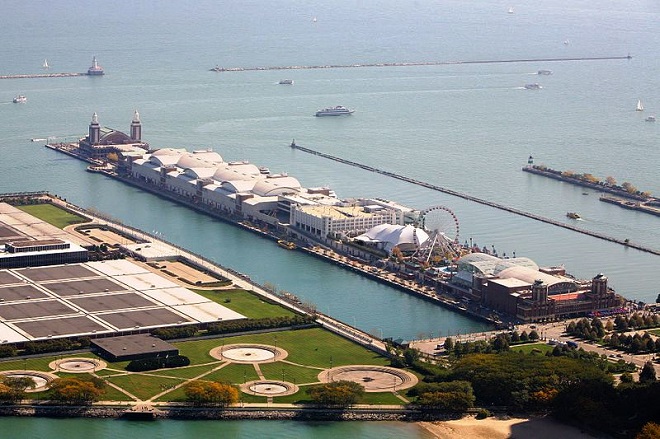 The Navy needed much more space for technical training With war with Germany drawing close. In August 1941, Navy Pier was closed to the public, and in a five-month period was fully converted to a Navy training center designated to accommodate up to 10,000 service personnel.

A large hangar-type building and a drill hall were built on 20 acres just west of the Pier. Six days before the attack on Pearl Harbor (7 Dec. 1941), classes began for aviation machinist mates, metal-smiths, and diesel mechanics.

In January 1942, the Navy began a very intense and difficult training program for electronic maintenance technicians. After the time the war was over and in mid-1946, the Navy returned Navy Pier to the City of Chicago.

In the four and one-half years under the Navy, over 60,000 servicemen from the U.S. and Allied nations trained at the Pier in several types of schools; this included about 15,000 electronic technicians in the two years of the Secondary School.

Navy pier as a College?

The International Exhibitions of the early 1960s drew attractions from around the world, including circus and folkloric dance acts, arts and crafts, and international cuisine. In 1965, the University moved to the Chicago Circle campus, and the Pier again fell into disuse.

The Pier for Public Gatherings

For many years after University of Illinois stopped using it very little use of the pier occurred. It was highly underused. However times have changed since those days. The Pier now features a large front lawn showcasing numerous larger-than-life public art sculptures and an interactive animated fountain.

The Pier continues to be used as an embarkation point for tour and excursion boats and is a popular place to watch lakefront events, including the annual Air and Water airshow and the parade of lighted and decorated boats during Chicago’s Venetian Night festival.

Some Attractions on Navy Pier

There are sightseeing tours from companies such as Seadog Ventures, Shoreline Sightseeing cruises and Water Taxi service, and the Tall Ship Windy. There are also dinner cruises by Entertainment Cruises, on their ships the Spirit of Chicago, The Odyssey II, and the Mystic Blue.

You can attend seasonal festivals for Halloween and Christmas. The Chicago Children’s Museum is a part of Navy Pier, with many different exhibits and activities for both children and adults to enjoy while visiting the museum.

The Pier also has an IMAX theater and the Smith Museum of Stained Glass Windows, many of which were salvaged from Chicago mansions. Pier Park is a landscaped area outdoors on the upper deck, between the Crystal Gardens and the Pepsi Skyline Stage.

The recession of 2008 affected The Pier. Later a renovation was adapted, but that was put on hold. In March 2012 a competition led to selection of a design concept that focuses on the Pier’s role as a waterfront promenade.

In 2013 the Authority announced plans to carry out the first elements of a streamlined version of that concept, with reworked streetscape and a wider pedestrian space, moving tour-boat moorings to improve the view from a new central stairway centered on the Ferris wheel.

Work began during the winter of 2013-2014, with completion expected by Summer 2015. In a recently released film Divergent (Mar 2014), the pier and Ferris wheel are shown abandoned and decayed in a future Chicago.

This Travel Quiz is about Navy Pier. This quiz is a True or False quiz. The level of this quiz is easy.

If you ever visit Chicago, and you should if you’ve never been there, be sure to stop by Navy Pier.