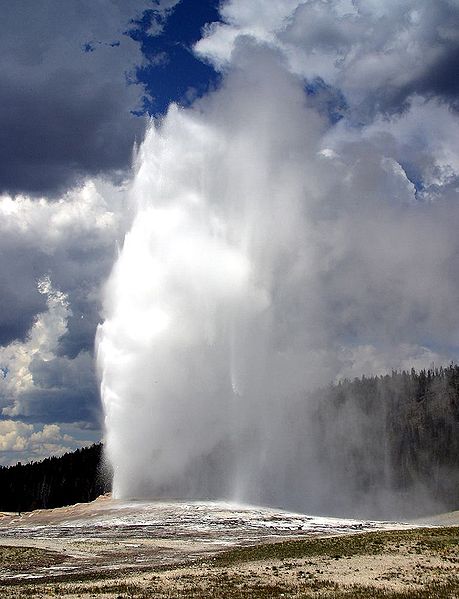 Old Faithful is a cone geyser located in a National Park in the United States. The park, widely held to be the first national park in the world, is known for its wildlife and its many geothermal features, especially Old Faithful Geyser, one of the most popular features in the park. The park is primarily in one state of the U.S., although it also extends into Montana and Idaho.

It was the first geyser in the park to receive a name. It is also known as one of the most predictable geographical features on Earth, erupting almost every 91 minutes. The geyser, as well as the nearby Old Faithful Inn, is part of the Old Faithful Historic District.

In the early days of the park, Old Faithful was often used as a laundry:

Old Faithful is sometimes degraded by being made a laundry. Garments placed in the crater during quiescence are ejected thoroughly washed when the eruption takes place. Gen. Sheridan’s men, in 1882, found that linen and cotton fabrics were uninjured by the action of the water, but woolen clothes were torn to shreds.

Between 1983 and 1994, four probes containing temperature and pressure measurement devices and video equipment were lowered into Old Faithful. The probes were lowered as deep as 72 feet (22 m). Temperature measurements of the water at this depth was 244 °F (118 °C), the same as was measured in 1942.

Native Americans have lived in the park region for at least 11,000 years. This National Park spans an area of 3,468.4 square miles, comprising lakes, canyons, rivers and mountain ranges. In the park hundreds of species of mammals, birds, fish and reptiles have been documented, including several that are either endangered or threatened.

In the early history of the park, visitors were allowed, and sometimes even encouraged, to feed the bears. Visitors welcomed the chance to get their pictures taken with the bears, who had learned to beg for food. This practice was banned in 1970.

This Travel Quiz is about Old Faithful Geyser. There are hints to help guess the answer. The level of this test is easy.

Old Faithful Geyser is a famous icon of the United States. Visit it if you get a chance. Aside from the geyser(s) the scenery is magnificent and the feeling of being there with nature is a great feeling.