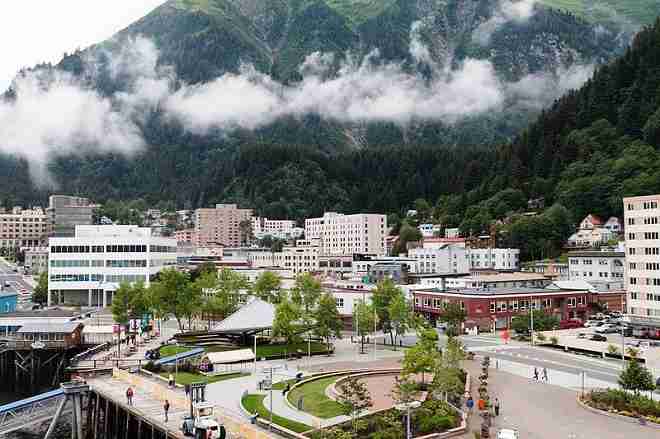 Downtown part of the city with a mountain the same name as the city rising in the background. Image by Alan Wu, CC-SA-2.0

The city shown here is dominated by steep mountains and water. In the picture it shows the downtown area, with a mountain of the same name as the city in the background. Although cruise ships do provide an economic boost to parts of the economy, not all the locals are appreciative. That’s partly there are few jobs gained because of that. The fishing industry is still a major part of the areas economy.

This city is not directly accessible by road, although there are road connections to several areas immediately adjacent to the city. Primary access to the city is by air and sea. Cars and trucks are transported to and from the city by barge. Residents of the city walk, hike, or ride bicycles for both recreational purposes and as transportation. The downtown area has sidewalks, and the neighborhoods on the hill above downtown are accessible by foot. Some roads in the city also have bike lanes, and there is a bike path parallel to the main highway.

This Travel Quiz is about a Large City/Borough with a Small Population. There are some clues to help guess the city. The level of this test is easy.