Picture Quizzes – Where you guess the location or picture

These are quizzes based on images. You will need to guess the answer, which will be related to the picture. The quizzes will have hints to help you guess the correct answer. For ALL QUIZZES read any article or text first, if there is any.

Be sure to click the Hint button on the quiz if there is one, to show the hints.

A panoramic view of Taj Mahal

Questions or clues such as:

What country is this famous structure located in?
What city is the Taj Mahal located in?
The city is a major tourist destination most notably because of the Taj Mahal, the Agra Fort and Fatehpur Sikrī, all three of which are UNESCO World Heritage Sites.
According to the 2011 census, the city where these attractions are located has a population of 1,775,134.

I’m back to this page 17 days later after reading something of India’s history. I saw an interesting painting related to India’s history so instead of asking questions about the picture I’m going to quiz you on part of the period during which this picture was created and which had a large part of the beginnings of modern India.

Here is a short essay on part of the activities that took place in most of India during the early 16th century through about the 1850s. This was the beginnings of early modern India.

Sometime in the early 16th century when northern India, being then under mainly Muslim rulers, fell to the superior mobility and firepower of a new generation of Central Asian warriors. The Mughal emperors were Central Asian Turko-Mongols from modern-day Uzbekistan, who claimed direct descent from both Genghis Khan (through his son Chagatai Khan) and Timur. 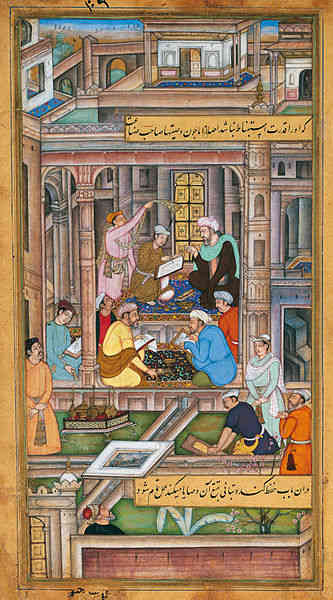 Artists and calligraphers at work. Mughal miniatures. Writing the will and testament of the Mughal king court in Persian, 1590–1595

The resulting Mughal Empire did not stamp out the local societies it came to rule, but instead balanced and pacified those societies it had conquered through new administrative practices and diverse and inclusive ruling elites. That lead to more systematic, centralized, and uniform rule.

The Mughals united their widespread realms through loyalty, expressed through a Persianized culture, to an emperor who had near-divine status. The Mughal state’s revenues, coming mostly from agriculture, and economic policies, mandated that taxes be paid in the well-regulated silver currency.

Such policies caused peasants and artisans to enter larger markets. The relative peace maintained by the empire during much of the 17th century was a factor in India’s economic expansion, resulting in greater patronage of painting, literary forms, textiles, and architecture.

Expanding commerce during Mughal rule gave rise to new Indian commercial and political elites along the coasts of southern and eastern India. As the empire disintegrated, many among these elites were able to seek and control their own affairs. By the early 18th century, with the lines between commercial and political dominance being increasingly blurred, a number of European trading companies, including the English East India Company, had established coastal outposts.

The East India Company’s control of the seas, greater resources, and more advanced military training and technology caused it to become attractive to a portion of the Indian elite. These factors were crucial in allowing the Company to gain control over the Bengal region by 1765 and sideline the other European companies.

The East India Company annexed or subdue most of India by the 1820s. Afterwards which India was no longer exporting manufactured goods as it long had, but was instead supplying the British empire with raw materials. By this time, with its economic power severely curtailed by the British parliament and itself effectively made an arm of British administration, the Company began to more consciously enter non-economic arenas such as education, social reform, and culture.

Sometime between 1848 and 1885, with the appointment in 1848 of Lord Dalhousie as Governor General of the East India Company, it set the stage for changes essential to a modern state of India. These included the consolidation and demarcation of sovereignty, the surveillance of the population, and the education of its citizens.

Take the quiz and let’s see how good you are in learning and remembering something about India’s history.

Quiz #25 Modern India in the Makings 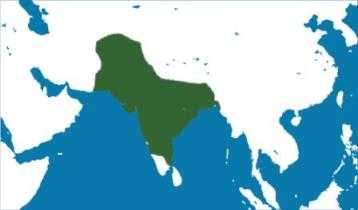 The Mughal Empire during the reign of Aurangzeb c. 1700. Photo by Gabagool, SA-CC-by-3.0

This Travel Quiz is about years 1500 – 1850 Modern India in the Makings. This is a True/False quiz. The level of this test is easy.

This quiz is about a brief period in India’s very long history. The approximate 350 year period covered was about the beginnings of the modern India according to some historians. India, like many other countries with a long history behind them was conquered and ruled by people from other countries. This time period was no exception. In this case, however, it marked the beginnings of the India we know today.

To learn more about a city in India click the link indicated below.