Central America Region of the Americas

Central America is the central geographic region of the Americas. 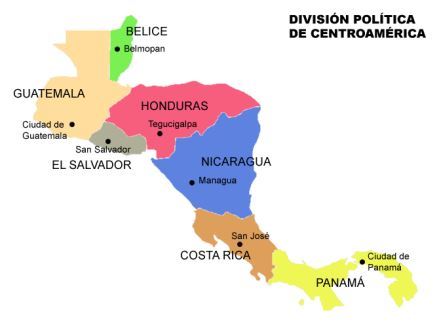 Countries and capitals of Central America

It connects the North American continent, with South America. This area, Central America is considered a subcontinent.

Central America is part of the Mesoamerican biodiversity hotspot, which extends from northern Guatemala through central Panama.

That is is a biogeographic region with a significant reservoir of biodiversity that is under threat from humans.

It is bordered by Mexico to the north, the Caribbean Sea to the east, the North Pacific Ocean to the west, and Colombia to the south-east, which is also the most southern point of North America.

As of 2009, its population was estimated at 41,739,000. It has a density of 77 people per square kilometer which is quite low compared to other areas. Central America covers an area of 524,000 square kilometers or 202,000 sq mi. As a comparison that size is just slightly bigger than the state of California and Kentucky combined.

Panoramic view of the increasing vertical development of the skyline of the city of San Jose, Costa Rica. Photo by Wikimaniac-CR, CC-SA-3.0. Click image for larger view.

The Pacific Ocean lies to the southwest, the Caribbean Sea lies to the northeast, and the Gulf of Mexico lies to the north. Most of Central America rests atop the Caribbean Plate. The region is geologically active, with volcanic eruptions and earthquakes occurring frequently. The 1976 Guatemala earthquake killed 23,000 people. Managua, the capital of Nicaragua, was devastated by earthquakes in 1931 and 1972; the latter killed about 5,000 people. Three earthquakes have occurred recently in El Salvador: one in 1986, and two in 2001. An earthquake struck northern and central Costa Rica in 2009, killing at least 34 people. In Honduras, a powerful earthquake killed 7 people in 2009.

In the region volcanic eruptions are common. In 1968 the Arenal Volcano in Costa Rica erupted killing 87 people. The three villages of Tabacon, Pueblo Nuevo and San Luis were buried under pyroclastic flows and debris. Fertile soils from weathered volcanic lavas have made it possible to sustain dense populations in the agriculturally productive highland areas.

Central America has many mountain ranges. The longest of the ranges are the Sierra Madre de Chiapas, the Cordillera Isabelia and the Cordillera de Talamanca. Between the mountain ranges lie fertile valleys that are suitable for the people. Most of the population of Honduras, Costa Rica and Guatemala live in valleys. The valleys are also suitable for producing coffee, beans, and other crops.

Read about Central America then take the easy quiz. Will you remember what you read?

The Pan-American Highway runs through Central America, and except for a 54 mile rainforest break, called the Darien Gap. The road links the mainland nations of the Americas to a connected highway system. According to Guinness World Records, the Pan-American Highway is the world’s longest “motorable road”. However, because of the Darién Gap, it is not possible to cross between South America and Central America by traditional motor vehicle.

What does Central America mean?

Apparently the term “Central America” may mean different things to various people in the world based upon different contexts and ideas. Here are some of the common interpretations.* 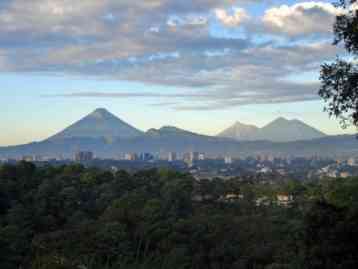 Guatemala City is the largest city in Central America with the “Agua”, “Fuego”, “Acatenango” volcanoes in the background. Click image for larger view.

So as you can see there is somewhat of a quandary as to exactly what composes Central America. It can depend on where in the world one is located as to what their idea of Central America is. Although it looks fairly cut and dry when one looks at a map of Central America, it is all but that in reality.

Take this quiz about Central America. 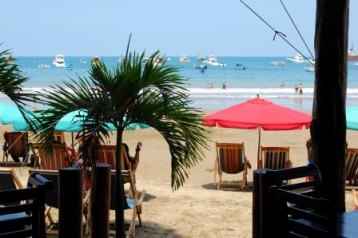 This Travel Quiz is about Central America. There are 4 – 6 clues to help guess each answer. The level of this test is easy to medium difficulty.

The cities mentioned in the article are potential cities you might want to visit. Consider each of these and other larger cities or area near one of these cities as a potential vacation destination.

If your passion is to travel, then you may not miss this short video about the top 10 destinations in Central America.

TWILA’s Mike Danna concludes our Central American Profile series with ecotourism in Costa Rica. The LSU AgLeadership Class XIII experienced the rainforests on the Arenal Hanging Bridges and learned how protective Costa Ricans are of their rainforests.

The best place for vacation in central america – El Salvador

We are wating for you !

Where to Go in Summer

A new series of videos which guide you, per country, where to travel. June 2012 Nicaragua