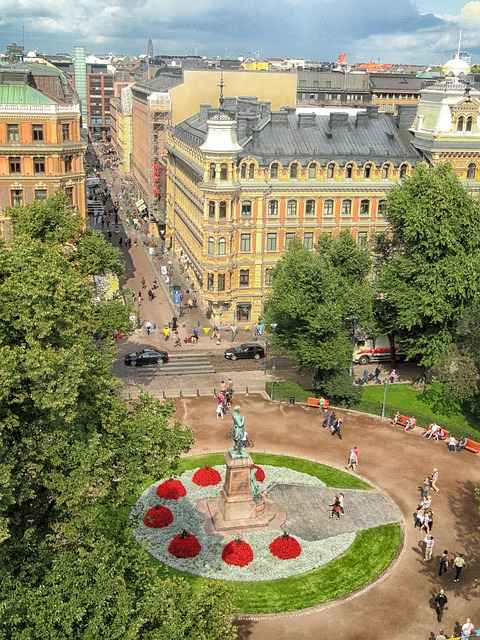 Finland, officially the Republic of Finland, is a Nordic country situated in the Fennoscandian region of Northern Europe. It is bordered by Sweden to the west, Norway to the north, Russia to the east, and Estonia to the south across the Gulf of Finland.

5.4 million people live in Finland (end of 2012), with the majority concentrated in its southern regions. In terms of area, it is the eighth largest country in Europe and the most sparsely populated country in the European Union. Politically, it is a parliamentary republic with a central government based in the capital of Helsinki, local governments in 336 municipalities and an autonomous region, the Åland Islands (making Finland a federacy). About one million residents live in the Greater Helsinki area (consisting of Helsinki, Espoo, Kauniainen, and Vantaa) and a third of the country's GDP is produced there. Other larger cities include Tampere, Turku, Oulu, Jyväskylä, Lahti, and Kuopio.

From the 12th until the start of the 19th century, Finland was a part of Sweden. It then became an autonomous Grand Duchy within the Russian Empire until the Russian Revolution. This prompted the Finnish Declaration of Independence, which was followed by a civil war where the pro-Bolshevik "Reds" were defeated by the pro-conservative "Whites" with support from the German Empire. After a brief attempt to establish a monarchy in the country, Finland became a republic. Finland's experience of World War II involved three separate conflicts: the Winter War (1939–1940) and Continuation War (1941–1944) against the Soviet Union and the Lapland War (1944–1945) against Nazi Germany.

Following the end of the war, Finland joined the United Nations in 1955, the Organisation for Economic Co-operation and Development (OECD) in 1969, the European Union in 1995, and the eurozone at its inception in 1999. During this time, it built an extensive Nordic-style welfare state.

Finland was a relative latecomer to industrialisation, remaining a largely agrarian country until the 1950s. Thereafter, economic development was rapid, such that today, Finland has a nominal per-capita income of over $46,000 (2012). According to some measures, Finland has the best educational system in Europe and has recently been ranked as one of the world's most peaceful and economically competitive countries. It has also been ranked as one of the world's countries with the highest quality of life. In 2010, Newsweek magazine ranked Finland as the overall "best country in the world" after summing various factors.