Cairo – Timeless Charm in the Capital of Egypt

The largest city in the Middle-East and Africa is Cairo, which is also the capital of Egypt. Its metropolitan area is the 16th largest in the world. Located near the Nile Delta, it was founded in CE 969. Cairo is nicknamed “the city of a thousand minarets” for its huge numbers of Islamic architecture.

A panorama taken from the Judge’s Club in Cairo, showing the Nile as well as Geziera. The Sofitel and Grand Hyatt Hotels can be seen in the far right of the photograph. The Cairo tower is in the middle and two major bridges on the far right and left. Photo by JasmineElias, SA-CC-by-3.0

The city has long been a center of the region’s political and cultural life. Cairo is also associated with Ancient Egypt as it is close to the ancient cities of Memphis, Giza and Fustat which are near the Great Sphinx and the pyramids of Giza.

Its official name literally means “the Vanquisher” or “the Conqueror”, sometimes it is informally also referred to as Kayro. It is also called Umm al-Dunya, meaning “the mother of the world”. With a city population in 2011 of 9,120,350. Cairo is by far the largest city in Egypt. With an additional 8 million inhabitants just outside the city, Cairo resides at the center of the largest metropolitan area in Africa and the Arab World as well as the tenth-largest urban area in the world. 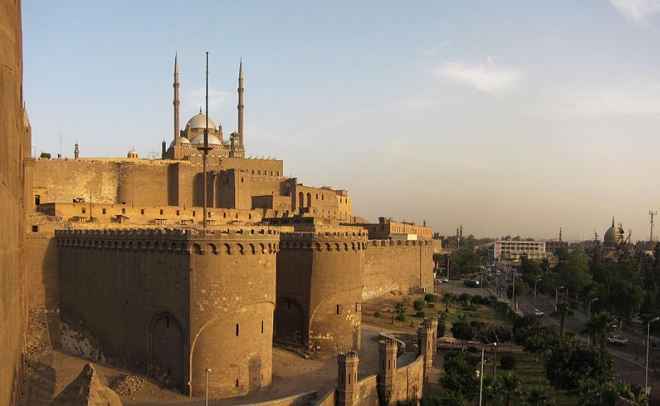 The Saladin Citadel of Cairo with the Mosque of Muhammad Ali is a fortification in Cairo. Photo by Ahmed Al.Badawy, SA-CC-by-2.0

Along the Nile River Valley and in Cairo, the climate is a hot desert climate, but often with high humidity due to the river valley’s effects. Wind storms can be frequent, bringing Saharan dust into the city during the months of March and April. Rainfall is sparse and only happens in the colder months, but sudden showers do cause harsh flooding. Snowfall is extremely rare.

As far back as four thousand years and over the ages, Egypt stood as the land where many civilizations have met. The Pharaohs together with the Greeks, Babylonians and the Romans have left their imprints here. Muslims from the Arabian Peninsula, led by Amr ibn al-A’as, introduced Islam into Egypt. Khedive Mohammad Ali, with his Albanian family roots, put Egypt on the road to modernity. The cultural mixture in this city is only natural, considering its heritage. Egypt can be likened to an open museum. There are monuments of the different historical periods on display all over Egypt.

Cairo. The word conjures up images not just of the city, but Egypt in general. Though most of these images have nothing to do with Egypt today – Egyptian priests with kohl-lined eyes, pharaohs all dressed in gold and haughty queens fanned with peacock feathers – they are still probably this destination’s biggest draw. 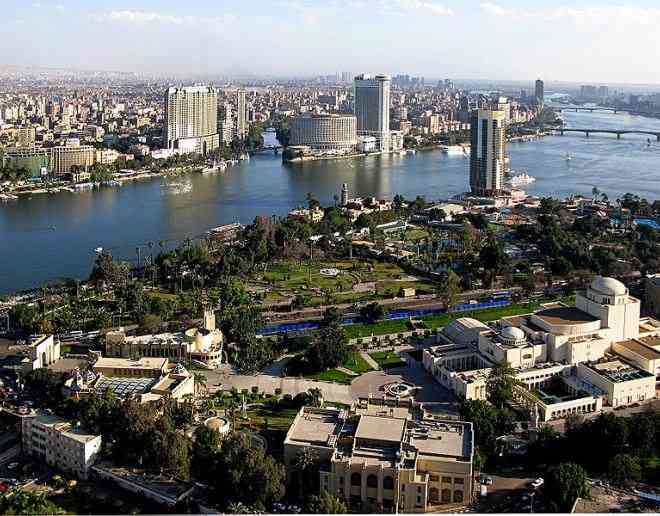 Cairo’s focal point from Cairo Tower showing the Nile, adjacent to the European-inspired districts near the city’s center.

Notice that when most tourists visits Egypt, they make a beeline for the Pyramids, the Sphinx and the ancient temples first. After all, how can you not check out what are probably the biggest structural accomplishments of the greatest civilization of the ancient world? History, in Egypt, is everything.

However, on the flight home you will realize that more than the Sphinx and the Pyramids, it is really Cairo’s lively streets, magnificent food and warm, hospitable people that will make you come back.

Cairo wears its ancient past on its sleeve and you can feel the rich bed of history pulsating in the metropolis. Walk into the different cultural sections of the city and you will see remnants of a fabulous and ancient empire whose mystery still beguiles the modern world. This city is old – really old – but as long as the Nile River still nurtures this piece of land, it will remain as strong and steadfast as it was 4000 years ago.

Upon arrival, Cairo’s insanely crowded streets, and the heat and the smell of street food will hit you like a ton of bricks. But upon closer inspection you will see that this cacophonous maelstrom is composed of people who are the country’s backbone – hardworking individuals who make up Egypt’s economic and political center.

After you take a pyramid tour, ooh and aah over the Sphinx and squeal over a camel ride, it is time for Egypt’s drink of choice – tea. Shaicafès are everywhere in Cairo but the tea they offer is nothing fancy – strong, sugary and plentiful. But what resonates more than the strong, aromatic brew is what these cafes represent. Up to this day, they are still filled with locals, mostly men, who gather to talk about politics and day-to-day living while playing chess or backgammon. Cafès are perfect for soaking up the local culture and engaging in conversation, even to travelers. Cairo is friendly to foreigners. Here, “Arab hospitality” is not a cliché, it is real.

Food in this city is spicy, filling and straightforward. There are many places here that offer international food, but try to resist the temptation of sitting in that comfortable restaurant and hit the streets for some fuul, a fava bean mash mixed with spices. Hard boiled eggs can be added to the mash and everything is eaten with Egypt’s ubiquitous bread of choice, baladi. 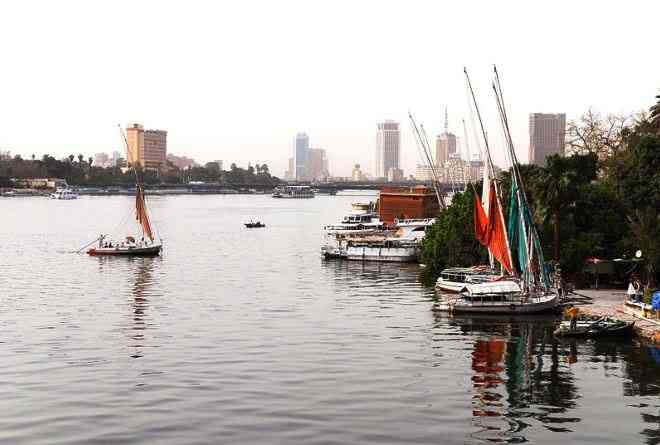 The river Nile flows through Cairo, here contrasting ancient customs of daily life with the modern city of today. Photo by Jawed, SA-CC-by-3.0

Although Cairo’s nightlife may not compare to some other big cities Cairo was ranked as the “world’s most 24-hour city” in a 2011 study conducted by the social networking site Badoo, placing it well ahead of other famous big cities such as New York, London or Paris. Cairo’s highly nocturnal lifestyle is attributed not only to young people in nightclubs but also to the importance of cafes, which remain very active at night as social gathering places to smoke shisha, and even to the late-night public activeness of families with children.

Cairo’s population is about 90% Muslim, so don’t expect a jumping nightlife or bars and clubs, even though in the above mentioned study in 2011 indicates differently. There was opposition to the “24-hour city” back then and things may be different now. The farthest you might get to bars and clubs may be the Egyptian whiskey – the spicy juice from the pickled vegetables practically every food vendor sells, but perhaps that is all for the better. Cairo is intoxicating enough as it is and if you want the full experience, you better keep sober.

View the pictures and read the above article BEFORE you take the quiz
and if you are inquisitive then be sure to view the videos.

Take the quiz and let’s see how good you remember what you read about Cairo Egypt. Be sure to watch the videos after the quiz.

This Travel Quiz is about Cairo Egypt. There may be clues to help guess an answer. The level of this test is easy.

Cairo is a potential city you might want to visit. The pyramids are not too far away and you definitely shouldn’t miss them if you visit Cairo.