Shimla is one of the most popular tourist destinations in all of India. Situated in the northern state of Himachal Pradesh, Shimla India is a picture perfect hill top station. 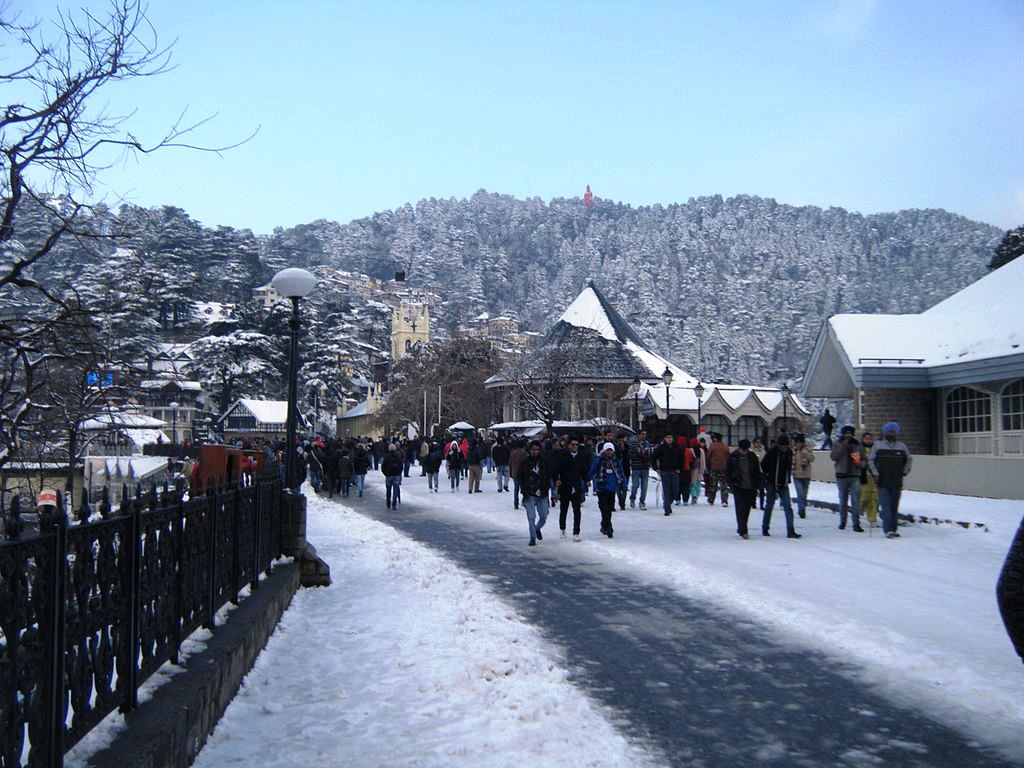 Shimla ground view of The Ridge with light snow on the ground. Photo by ShashankSharma2511, CC-BY-SA-3.0. Click image to enlarge.

The reason behind its immense beauty is its natural surroundings, composed of lakes, luscious pastures and the snow covered Himalayan range. Shimla retains its colonial ambiance by preserving most of the structures built during that period.

The city of Shimla, also known as Simla, is the capital city of the Indian state of Himachal Pradesh, located in northern India. It’s a city of 171,817 people as of 2011 situated in the south-western ranges of the Himalayas. The average altitude is 2397.59 meters (7866.10 ft). The climate in Shimla is predominantly cool during winters, and moderately warm during summer. 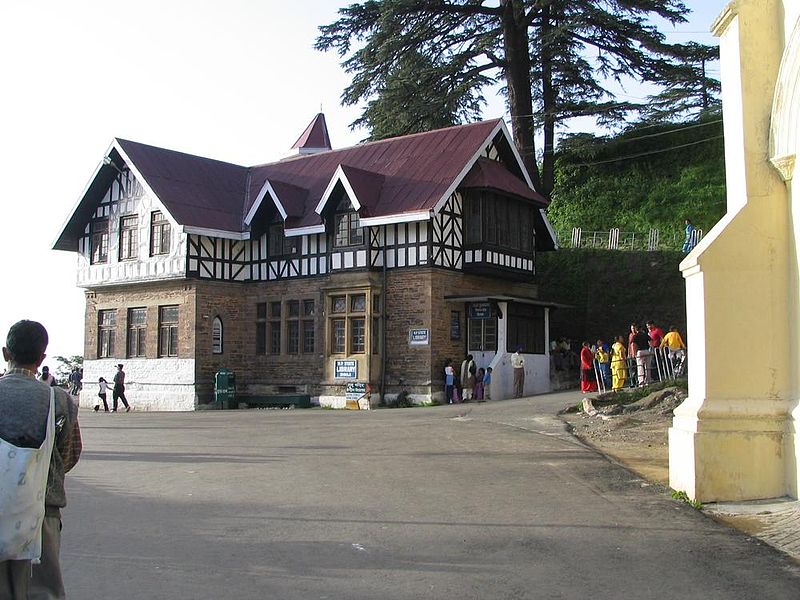 The public library on The Ridge near the church. Photo by Ajar, CC-BY-SA-3.0. Click image to enlarge.

There are many attractions to enjoy in Shimla including grand old structures like the Viceregal Lodge and Botanical Gardens. The Mall remains to be a tourist favorite as this huge shopping complex offers a wide variety of shops, eateries, art exhibitions and specialty stores. The hill station also houses important temples and religious buildings such as Christ Church & St. Michael’s Cathedral, Tara Devi, Jakhu Temple and Sankat Mochan. To get an incredible view of the nearby mountain ranges, join other tourists at the Ridge. This big open space cannot be missed as it sits in the heart of town. 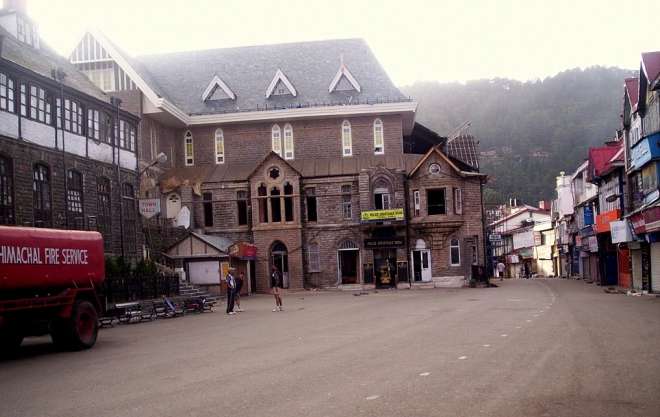 Shimla is equally special at any season of the year. Although it can be visited year long, it is best not to come here during the monsoon season since the place periodically experiences landslides, making the roads more slippery and dangerous. During winter, the hill becomes the ultimate spot for outdoor sports like skiing and ice skating. Summer, when all surrounding trees and flowers are bright and full of life, provides amazing hiking and trekking opportunities. One way of fully exploring Shimla is by going one of the guided walking tours around the town proper and the seven hills that contains old temples, palaces and mansions.

However, if you can only do one activity in the Shimla region then let it be riding a train through the great Kalka-Shimla Railway Line. This railway route is one of the three lines in India that are included in the UNESCO World Heritage List. During the ride, you will have complete viewing access to the snow clad Himalayan Mountains and mysterious pine forests. This in itself is worth taking the route. 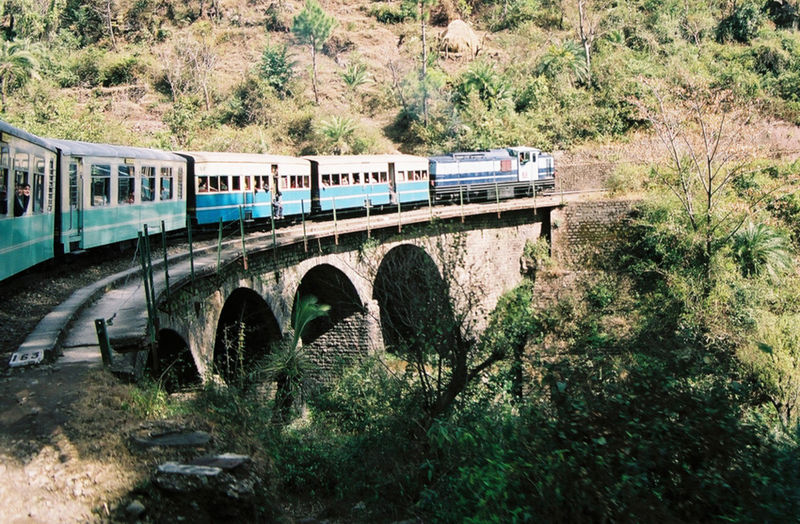 Kalka-Simla Railway. Passenger train on the Kalka-Shimla Railway route on one of the smaller bridges. Photo by A.M.Hurrell, CC-BY-SA-3.0. Click image to enlarge.

Extending up to 60 miles (96 kilometers) the railway line starts from the town of Kalka and ends at the Shimla Hill station. This fascinating engineering masterpiece was built during the 19th century by the British colonialists. The Kalka-Shimla Railway line is excitingly narrow. Situated about 4,659 feet above the ground, it passes through a total of 102 tunnels and more than 800 bridges.

There are a couple train services that regularly run this railway route including The Shivalik Deluxe Express and The Rail Motor Car. The Himalayan Queen is the standard train service and is scheduled to make the most number of stops. The other newer services are the Shivalik Palace and The Shivalik Queen Tourist Coaches, which feature refurbished heritage trains. These upscale coaches have a limited number of seats and they offer the most luxurious ambiance, facilities and service.

The train services are by no means fast due to steep climbs. However, this presents a perfect opportunity to take your time in capturing the scenic landscapes especially the one from Barog to Shimla. For the best views, be on the right side of the train going to Shimla and on the left side when going back to Kalka.

Employment in Shimla is largely driven by the government and tourism. The hotel industry is one of the major sources of income generation for the city. Shimla leads the list of Indian cities with the highest ranked hotels. 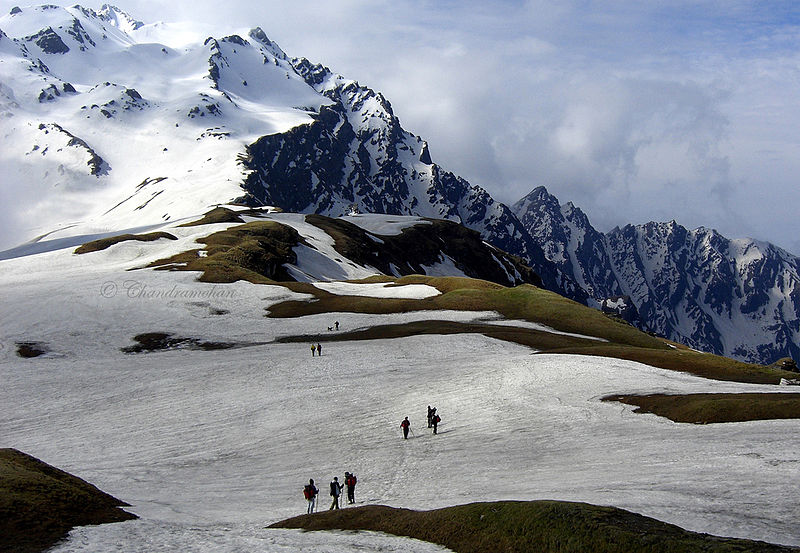 Skiing is a popular tourist activity in Shimla. Photo by Chandramohan B V, CC-BY-SA-2.0. Click image to enlarge.

Environmental degradation due to the increasing number of tourists every year without the infrastructure to support them has resulted in Shimla losing its popular appeal as an ecotourism spot. Shimla lies in the south-western ranges of the Himalayas. Shimla is a Zone IV (High Damage Risk Zone) per the Earthquake hazard zoning of India. Weak construction techniques and increasing population pose a serious threat to the already earthquake prone region. Another rising concern in the region are the frequent number of landslides that often take place after heavy rains.

Take this quiz and let’s see how good your memory is.

This Travel Quiz is about Shimla India. There are only True or False Questions in this quiz. The level of this test is easy.

Shimla is a potential city you might want to visit when going to India. It’s a city you can go to in either the summer or winter and other times of the year, but try to avoid the monsoon season.

If you are in need of a bit of luck now, then click the first link below and take a quiz about a lucky city.
To read about a brief history of modern India click the second link and take the quiz to check your memory.
To learn more about cities in India click the third link below which will take you to our main travel site.

A Tourist in Shimla

The Kalka Shimla Railway is a Heritage track which is enchanting journey besides an engineering marvel. It was a life time memory when I traveled in it on 13 July 2013. From a 12 mp digicam the video had been shot while travelling in the train itself.