These days, it is hard to find an authentic honeymoon spot where landscape is pristine and unadulterated and the romantic atmosphere intact. Fortunately, love birds still have Aitutaki. One of the main islands in the southern Cook Islands, Aitutaki exudes a breathtaking beauty, not drowned by mass tourism. This off-the-beaten path destination offers honeymooners and travelers a paradise of relaxation. Thus, it’s not surprising that Aitutaki is nicknamed the “honeymoon island”. 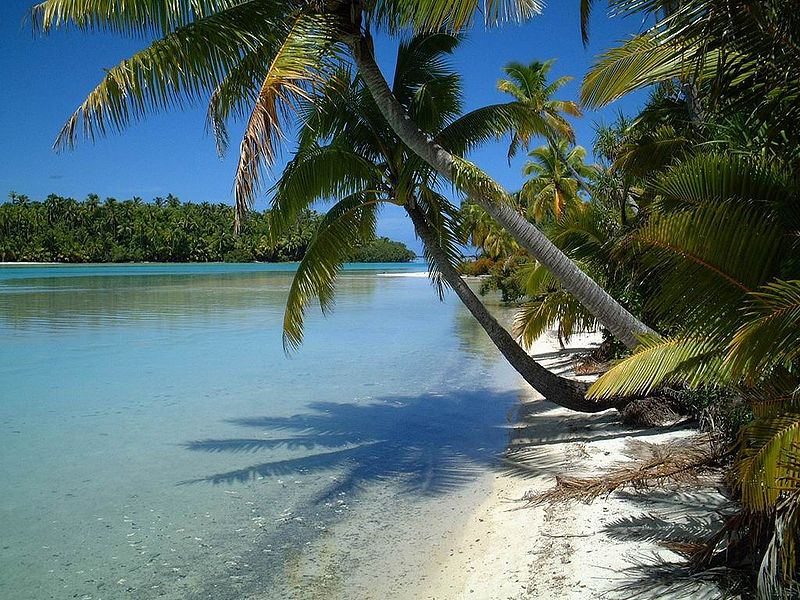 Motu Tapuaetai (English: One Foot Island), in the southern part of Aitutaki Atoll is a popular picnic spot and destination for all lagoon cruises operating on Aitutaki. Click image to enlarge.

Aitutaki is an “almost atoll”. Aitutaki, also traditionally known as Araura, Ararau and Utataki, is one of the Cook Islands, north of Rarotonga. It has a population of approximately 2,000. Aitutaki is the second most visited island of the Cook Islands. The main village is Arutanga (Arutunga) on the west side. The barrier reef that forms the basis of Aitutaki is roughly the shape of an equilateral triangle with sides 12 kilometers in length. The southern edge of the triangle is almost totally below the surface of the ocean, and the eastern side is composed of a string of small islands (including Mangere, Akaiami, and Tekopua).

The Cook Islands are an island country in the South Pacific Ocean in free association with New Zealand. Although Cook Islanders are citizens of New Zealand, they have the status of Cook Islands nationals, which is not given to other New Zealand citizens.

The minor islands, and there are many, form part of the perimeter of the lagoon. Most of the main part of island is in the north. Its fertile volcanic soil provide tropical fruits and vegetables. Two of Aitutaki’s 15 islets are volcanic. The rest are made of coral. Aitutaki Airport is located close to the triangle’s northern point. There is an area suitable to land flying boats in the southeastern part of the lagoon.

It is thought that Polynesians were probably first to settle Aitutaki around AD 900. The first known European contact was with Captain Bligh and the crew of the HMS Bounty when they discovered Aitutaki on April 11, 1789, prior to the infamous mutiny. Aitutaki was the first of the Cook Islands to accept Christianity, after London Missionary Society missionary John Williams visited in 1821.

In 1942 New Zealand and American forces were stationed on the island, building the two-way airstrip that can be seen today. This airport, and one on the northernmost Penrhyn Island, were to be used as bases by the Allies during World War II. The first aircraft, an American light bomber, landed on November 22, 1942. When the war ended some of the servicemen remained and married the locals. 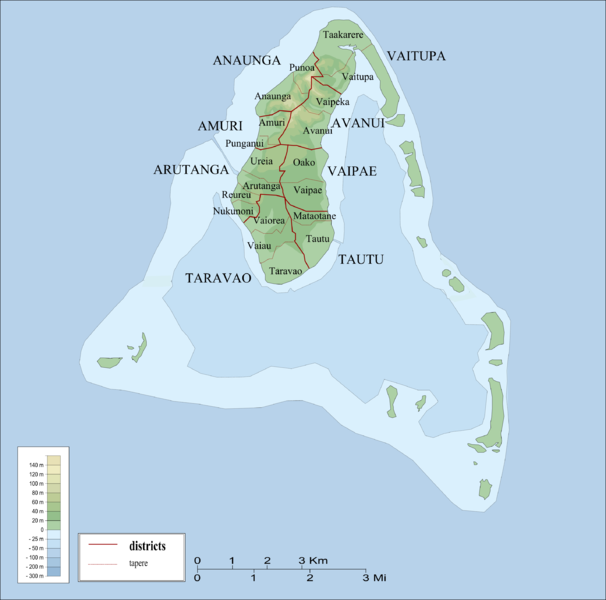 Districts and tapere of Aitutaki according to the constitution.

Two of Aitutaki’s small islands, Rapota and Moturakau, were the locations of the first series of the UK reality television program Shipwrecked in 2000. In 2001, Steve Fossett passed over just south of Aitutaki in the balloon Solo Spirit during his round-the-world trip.

Then in 2006, the island was used as the location for the tribal council in the US TV program Survivor: Cook Islands. Surrounding islands were used for tribal camps and crew locations. One of the tribes was named Aitutaki (or ‘Aitu’) after the island. Then, not long afterwards, Shipwrecked returned again, with Shipwrecked: Battle of the Islands 2006. This was filmed on the same islands as before. One year later, Aitutaki was the locale of an episode of Survivorman.

The island is divided into several villages. Arutanga is considered to be the main town as it is home to many shops, restaurants, some banks, and the post office. The northern part of the island has the most number of accommodation facilities for tourists, and is locally called Amuri. Aitutaki is world famous for its spectacular lagoon, and a visit to the island is not complete without experiencing its magnificence. The lagoon is said to be so stunning that it will leave a lasting impression to anyone who sees it.

The Aitutaki Lagoon, which exudes vibrant hues of indigo blue, turquoise, and jade green, is surrounded by bright colorful coral formations and 15 small islets also called motu. The Aitutaki islets’ clear water and natural beauty are said to rival those of Bora Bora Tahiti. For a romantic escapade, you can easily book a boat cruise to any of the palm tree fringed islets. Once there, relax and experience a relaxing picnic on one of their soft white sandy beaches. 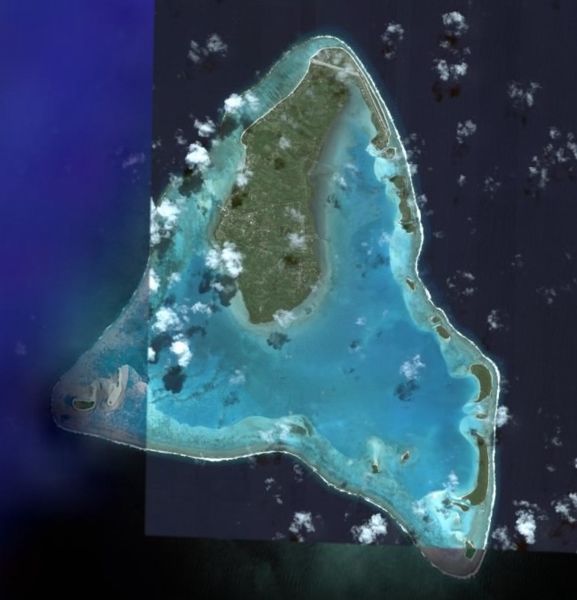 NASA picture of Aitutaki. Aitutaki, also traditionally known as Araura, Ararau and Utataki, is one of the Cook Islands, north of Rarotonga. It has a population of approximately 2,000. Aitutaki is the second most visited island of the Cook Islands. The main village is Arutanga (Arutunga) on the west side.

Some of the islets that are popular stops for lagoon cruises include One Foot Island and Akaiami, which is peaceful and is rich with coral reefs. One Foot Island has gained its popularity because of its white sandy beach, its own blue lagoons, and a post office box, which is considered to be one of the world’s most remote.

Aside from swimming and sunbathing, you can also explore the ocean floor and see various marine creatures around the lagoon by snorkeling and diving. If you’re feeling more adventurous, you can ditch the organized cruise lagoon tours, and get yourself a kayak or a canoe to explore the uninhabited Aitutaki Lagoon islets on your own. Fly fishing within the lagoon area and game fishing on the open ocean can also be arranged. On dry land, embark on an exciting safari or walking tour into the island’s jungle region.

The luxurious Aitutaki Lagoon Resort & Spa is the only resort on the island that has its own private island naked Akitua. The resort provides the most wonderful views of famous Aitutaki Lagoon. Fortunately, the resort offers non-hotel guests a day pass to enjoy the view and access their water sports equipment, beaches, bars, restaurants, and spa facility. You can even ask the resort to arrange an intimate candlelit dinner by the beach. 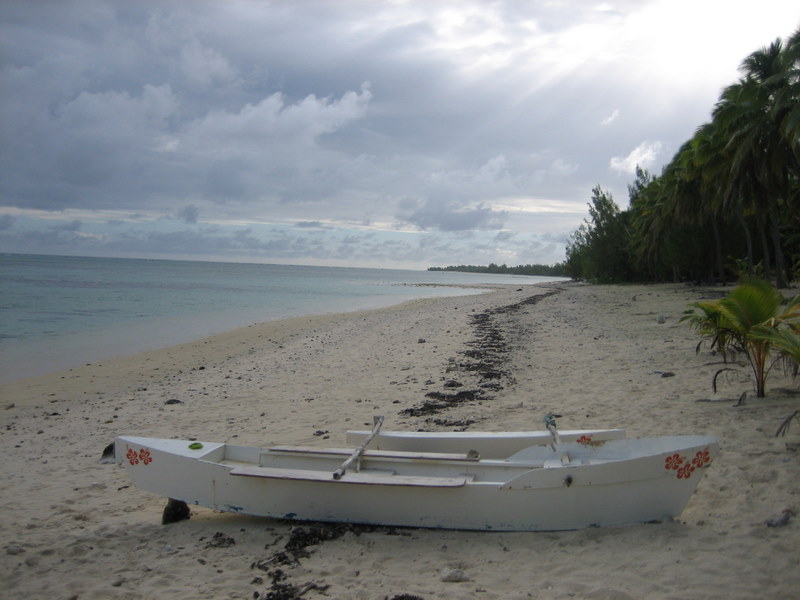 The beach on Aitutaki during the filming of Survivor: Cook Islands in July 2006. The beach was deserted, as the island’s hotels were full of production crew. Photo by Ian Sewell, CC-BY-SA-3.0. Click image to enlarge.

Other notable sites you should not miss visiting while in Aitutaki include the educational Ministry of Marine Resources, the fun 9-hole Aitutaki Golf Club, the busy Aratunga Wharf and the bustling Saturday market at the Orongo Center. Reaching the island can be challenging because of its location, but it is still quite possible. To access Aitutak, you will need to take a 45-minute flight from Rarotonga, the capital of the Cook Islands.

In June 2010 the island was nominated “the world’s most beautiful island” by Tony Wheeler the founder of Lonely Planet travel guide.

In February 2010, Aitutaki was hit by Cyclone Pat. The high winds of the storm ripped the roofs off of most houses and damaged other buildings including a school and a hospital. At least 60% of houses were damaged. There were no reported deaths but there were a few minor injuries reported. An Air Force Hercules cargo plane and an army engineering team were provided by New Zealand along with an initial $200,000. Cook Island MP Teina Bishop said “New Zealand aid should have been sent to the devastated area much sooner.”

Take the quiz and let’s see if you learn a few things about Aitutaki Island.

This Travel destination quiz is about Aitutaki Island. There are True or False questions for this quiz. The level of this test is easy.

Answer all questions. Each answer is worth about 5 or 10 points. If you don’t know the answer, then take a guess (unless you want a guaranteed zero for the answer).

To learn more about off the beaten trail travel destinations click the ink below which will take you to our main travel site.

HERE WE ARE IN THE COOK ISLANDS PART 10 AITUTAKI

This is a travelogue of a 2009 family’s vacation in the Cook Islands. Showing what they did and what a holiday in the Cook Islands is like.
Part Ten they stay at Paradise Cove in Aitutaki. Take a walk on the beach and hike to the highest point on Aitutaki, Mt. Maungapu, for views of the Lagoon.

Getaway viewers should know Aitutaki well — the coral atoll in the Cook Islands is way up there on Catriona Rowntree’s list of favourite places. She dreamed about it being her honeymoon destination even before she met her new husband, James Pettit, and last year, all her dreams came true.

Pacific Resort is Aitutaki’s only five-star resort. It has just 27 absolute beachfront villas and is both luxurious and private. On one side is the azure Pacific and the other side is volcanic rock formations. It covers 19 acres of gardens and beachfront. All rooms have super-king-sized beds, luxurious Bulgari products in the bathroom and private decks.