The Cosmopolitan City of Casablanca

Located in western Morocco on the Atlantic Ocean, Casablanca (meaning “White house”) Morocco is the largest city in the country. It is one of the largest and most important cities in Africa, both economically and demographically. It is Morocco’s chief port and industrial center. The 2013 census, adjusted with recent numbers, recorded a population of 4,150,000 in the prefecture of Casablanca and about 5 million in the region of Grand Casablanca or the metropolitan area. Casablanca Morocco is considered the economic and business center of the country, while the political capital city of Morocco is Rabat.

View on the medina of Casablanca in Morocco. Photo by Pawel Ryszawa, SA-CC-by-3.0

The area which is today Casablanca was founded and settled by Berbers by at least the 7th century BC. It was used as a port by the Phoenicians and later the Romans. The independent Berber kingdom of Barghawata in the area arose around 744 AD. In his book Wasf Afriquia, Al-Hassan al-Wazzan refers to ancient Casablanca as “Anfa”, a great city which was founded by the Berber kingdom of Barghawata in 744 AD.

Casablanca in 1572, when it was still called Anfa.

It continued until it was conquered by the Almoravids in 1068. During the 14th century, under the Merinids, Anfa rose in importance as a port. The last of the Merinids was ousted by a popular revolt in 1465. Later in part of the 1500s – 1600s it became under Spanish control. There was the French conquest in the early 1900s.

In the early 15th century, the town became an independent state once again, and emerged as a safe harbor for pirates and privateers, leading to it being targeted by the Portuguese, who destroyed the town in 1468. The Portuguese used the ruins of Anfa to build a military fortress in 1515. The town that grew up around it was called “Casa Branca”, meaning “white house” in Portuguese. The Europeans eventually abandoned the area completely in 1755 following an earthquake which destroyed most of the town. The town was finally reconstructed by Sultan Mohammed ben Abdallah (1756–1790), the grandson of Moulay Ismail an ally of George Washington with the help of Spaniards from the nearby emporium. The town was called ad-Dār al-Bayḍāʼ, the Arabic translation of the Spanish word Casa Blanca, meaning “white house”.

Casablanca has a very mild Mediterranean. Its climate is strongly influenced by the cool currents of the Atlantic Ocean which tends to moderate temperature swings and produce a remarkably mild climate with little seasonal temperature variation and a lack of extreme heat and cold. Apart from the Atlantic coast, the Bouskoura forest is the only natural attraction in the city. The forest was planted in the 20th century and consists mostly of Eucalyptus, Palm and Pine trees.

When many people think of Casablanca, they envision the romantic iconic film, Casablanca of 1942-3, that features characters made memorable by Humphrey Bogart and Ingrid Bergman. Today, Casablanca is not anymore that city torn between the Allied and German forces in World War II. It is the economic capital of the country, and a dynamic cosmopolitan that is inspired by European design and the way of life. 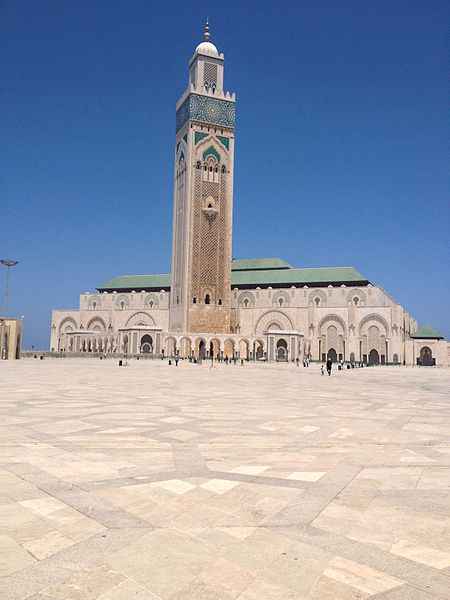 In the city you will find a lot of fashion design exhibits and art galleries showcasing contemporary art. Some travelers see Casablanca as not exotic enough as other Moroccan cities, but the city has a distinct appeal and it offers something different to visitors. Spend a day or two in Casablanca and see the liberal and progressive side of Morocco.

One of the highlights of a visit to Casablanca is the Hassan II mosque, which celebrates the architectural tradition adopted by the city for many decades. Completed in 1993, the mosque features the artistry of over 4,000 Moroccan artisans. Hassan II, which stands at 200 meters, is one of the largest in the world. It also has the world’s tallest minaret. Fortunately, this mosque is open to non-muslims.

Thus, you will get the chance to see its lovely interior, tile work, hammam (public bath) and other features. Note that there have been conflicting reports about non-muslims being able to see the interior. Apparently you can enter only on a guided tour, where they point out all the huge facilities and lavish decorations, and of course the fact that you can see the Atlantic Ocean through the glass floor. 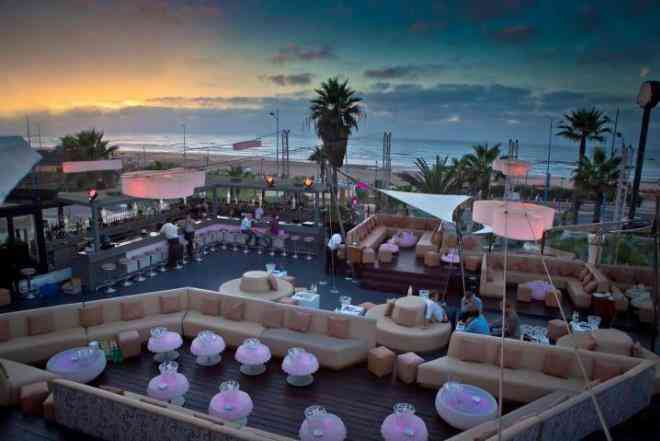 The city’s Old Medina is located on the north of the Place des Nations Unies. Although not as impressive as the one in Marrakesh, this traditional walled town gives you a good feel about the old Casablanca. Here, you will see several vendors attracting shoppers in alleyways and narrow streets. Other fascinating old structures worth visiting in the city include the delicately decorated Hispanic-Moorish building called Mahkama du Pacha, Pacha (Courthouse of the Pasha)and The mosaic-adorned Central Post Office built in 1918.

To get the more modern feel of the city, proceed to the prominent district of Maarif, home to trendy shops and luxurious establishments. The up market neighborhood of Anfa and Boulevard Mohammed V are just some of the places where you can find great shopping arcades and interesting restaurants.

If you are a fan of seaside areas, visit the Corniche neighborhood and Boulevard de l’Ocean Atlantique. This coastal area is a popular seaside resort abundant with swimming pools and hotels. This is a favorite meeting and mingling spot for city dwellers. Within the vicinity are a number of bars, clubs, fast food chains and ocean view cafes that keep the nightlife extremely vibrant. Just past the Corniche area is the Shrine of Side Abderrahman, which can only be reached during low tide. Although the shrine is restricted to non-Muslims, you are allowed to walk around the tiny town around the shrine. 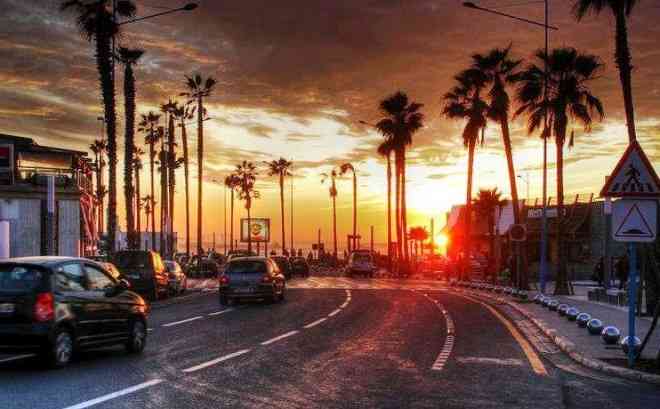 After a long day of exploring Casablanca Morocco, try getting a steam bath and scrub in one of the traditional hammams in the city. If you have not tried a hammam bath, the city is a good spot to do it. Still fascinated with Casablanca architecture? Drop by Place du 16 Novembre, where you can marvel at 1930s art deco architecture. The place represents the heavy design influence made by France during that era. If you still feel a little melodramatic about the film Casablanca, then stop by Rick’s Cafè, whose construction was inspired by the 1942 film.

Take the easy quiz below and let’s see how good you are in remembering what you read about Casablanca Morocco. 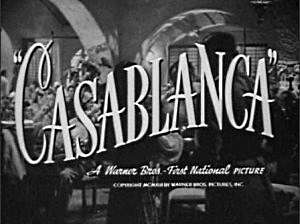 This Travel Quiz is about Casablanca Morocco. This is a True or False quiz. The level of this test is easy.

Answer all questions. Each answer is worth up to 10 points max. If you don’t know the answer, then take a guess (unless you want a guaranteed zero for the answer).

Casablanca Morocco is a potential city you might want to visit. It is the largest city in Morocco and it has a Cosmopolitan atmosphere.

To learn more about a city or area in Africa click any of the links indicated below.

Views from a taxi around the streets of Casablanca, on a route that took us from the Hassan II Mosque to the Place de Mohammed V and on to the Port de Casablanca. Casablanca, is a city in western Morocco, located on the Atlantic Ocean.

It is the capital of the Grand Casablanca region. With a population of over 5,500,000, Casablanca is Morocco’s largest city as well as its chief port. It’s also the biggest city in the Maghreb. Casablanca is considered the economic and business center of Morocco, while the political capital city of Morocco is Rabat.

Casablanca, a city of many faces, Oriental yet modern. From being a former Berber settlement to today’s commercial metropolis, around 80 percent of Moroccan industry is concentrated in Casablanca, the country’s financial, technological and commercial centre and also Africa’s largest seaport.

Jutting into the sea is the Hassan II Mosque. ‘It was He who created Heaven and Earth in six days!’, this paragraph from the Koran inspired Hassan II to build his momentous mosque that extends for nine hectares, a superlative construction that could comfortably accommodate the entire Petersdom in Rome.

Casablanca is a large city surrounded by many ancient villages where life has changed little since ancient times.

The Stade Mohammed V is the centre of Casablanca and is located between the old Medina and the new town with its large residential districts. Several administrative buildings, mosques and Art Deco buildings are situated in the vicinity of the Stade Mohammed and there’s also a pedestrian-only shopping mall. The head offices of numerous banks, insurance and commercial companies are located within the modern and flamboyant city centre with its imposing skyscrapers.